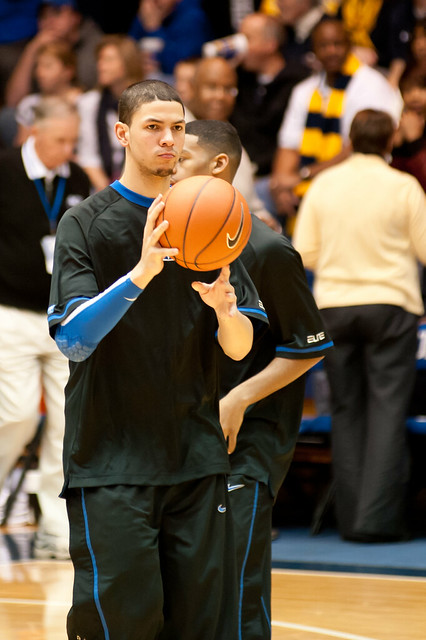 What a game, does it get any better than two top ten teams going back and forth trying to win the tobacco road rivalry? The answer is no, no it does not get much better than that.

Last night Austin Rivers and the Duke Blue devils put together one of the most amazing comeback’s I have ever witnessed in college basketball.  It was a close game throughout; both teams battled and never gave up. The lights were not too bright for this young man last night, in front of 21,000 screaming Tar Heel fans he had the biggest game of his life.

The score was 82-72 with about 2 minutes and thirty seconds left, and the feeling in the game started to shift. Carolina could not seem to finish Duke off. Duke kept lingering around enough to be able to make a late game run.
Austin Rivers scored 18 of his 29 points from beyond the arch, so it was only fitting for him to win the game in the same manner. After duke went on a 10-2 late game run in the second half, it was left up to the streaky jump shooter Austin Rivers.
Duke inbounds the ball and gets it gets it in the hands of their sure fire freshman. Austin Rivers sets up about a foot behind the 3 point line pulls up over the 7ft Tyler Zeller and drains the 3 pointer in the Dean Smith Center to stun Carolina nation.
Austin Rivers took off running down the court screaming as the whole bench of teammates chased him. It was an amazing moment and reminds all college basketball fans why we love the NCAA. This is what rivalry week is all about; clutch moments, big time wins, and young men making names for their selves. I believe Austin Rivers summed it up the best when he said, “My favorite win I’ve ever had in my entire life.”