The Road of Never Giving Up; Alex Smith 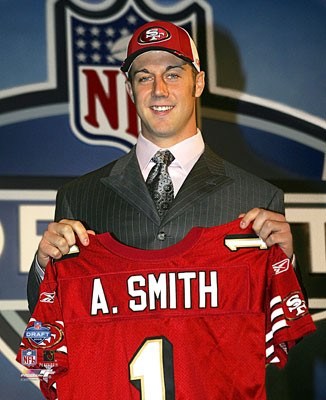 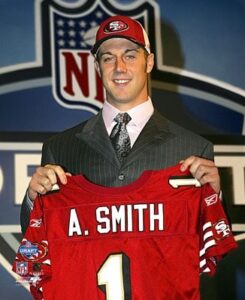 Alex Smith has battled through more ups and downs throughout his NFL career then most. Smith has never slowed down nor has he taken anybody’s negativity to heart. The 49’ers are having their best season in ten years. This is something to be credited to the coaching staff and Alex Smith.
Alex Smith has not had any stability in the organization, so it’s understandable for his demise in recent years. As you can see with a little encouragement and stability Alex Smith can be one of the top QB’s in the League. Against the Saints one of the highest powered offenses in the NFL this year, Smith went score for score. Smith made play after play when he had to. Most thought that he would simply manage the game and continuously hand the ball off to his super star running back Frank Gore, but the story was far from that. Smith’s numbers were impeccable; throwing for 299 yards, completing 24 out of 49 pass attempts, tossing 3 touchdowns and rushing for a late touchdown to put the 49’ers in position to win the game. One of the three touchdowns Smith threw was a game winner with 7 seconds to go; he seemed to make the drive up the field look easy. Although Smith had a fired up tight end in Vernon Davis to throw the ball to, this does not change the confidence and calmness Smith put on display.
Now Smith needs to take a few more steps to make it too and win the ultimate goal; The Super Bowl. The bandwagon is building fast, the 49’ers look on point with all aspects of the game, special teams, offense and defense. The San Francisco 49’ers are looking in the right position to bring a Super Bowl back to the Bay area since Hall of Famer Steve Young did this feat in 1995.